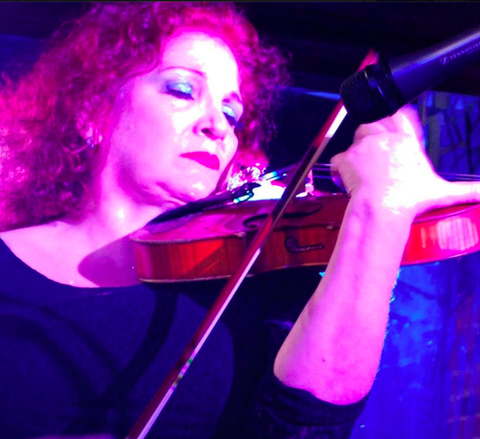 Rozanna Weinberger’s understanding about technique has come from working with some of the best teachers in the world, including Karen Tuttle, William Primrose, William Lincer among others. But is has also come from having to overcome the effects of breaking her neck at age 15. As a result of this injury Rozanna had vertebrae in her neck fused together, which had an impact on her ability to move her neck, shoulders and arms. While hospitalized for this injury, Ms. Weinberger learned that she had been selected to perform at Kennedy Center with a youth orchestra selected from young talent from every part of the country. Determined to participate, and with just 2 months to recover enough to be part of the performance, she did ultimately participate in the orchestra, despite having to use a neck brace and cast on her leg, from having bone taken from her leg to repair her neck.

The artist refused to allow this setback to get in the way of her dream to be a concert soloist and ultimately had the opportunity to perform solo with orchestras along with many other performing opportunities. Her challenge included playing hundreds of thousands of ‘open strings’ observing the difficulties and developing a refined kinesthetic awareness, which enabled the artist to sift through the discomfort and find the optimum approach.

As a soloist she has always believed that it is necessary to do difficult things easily and that this is what defines a virtuoso. Her setbacks from breaking her neck, ultimately became the impetus for overcoming challenging situations and learning to play the most difficult music with ease and joy.

Rozanna Weinberger recently performed as soloist at the Tribeca Film Festival, for an event sponsored by the Manhattan Producers Alliance and with flute virtuoto Robert Dick at The Spectrum, She has premiered concertos by composers Tania Leon and Maurice Gardner and has performed twice at the International Viola Congress. She has performed original music on the runway for Fashion Week while her award winning music video, Chromatic Fantasy has screened at International Film Festivals and televised throughout North and South America. Her unique style led to recording a solo viola soundtrack by Christopher Mangum for the King Tut Exhibition and as an improviser, Rozanna has played with violinists Sara Caswell, Nigel Kennedy and cellist Dave Eggar. Her solo recordings are available through Arabesque Recordings and North Pacific Music. She has been a guest panelist at Peabody Conservatory of Johns Hopkins University and Juilliard where she has been a consultant for entrepreneurial studies. Her unique artistic approach coupled by a vision of what is needed in the string world, led to creating her own line of violins, ‘Rozanna’s Violins, available at Sam Ash, Guitar Center and other fine retailers. Rozanna has also written for Strings Magazine. As a New York freelancer, Rozanna has performed for numerous Broadway shows and for the Radio City Christmas Show.

More Information Is Available at http://www.rozannasviolins.com