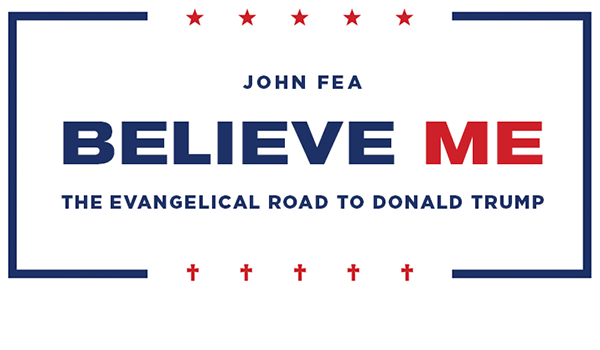 Click here to watch the video podcast of Thomas Capone with John Fea
and talks about his book entitled
“Believe Me: The Evangelical Road to Donald Trump” 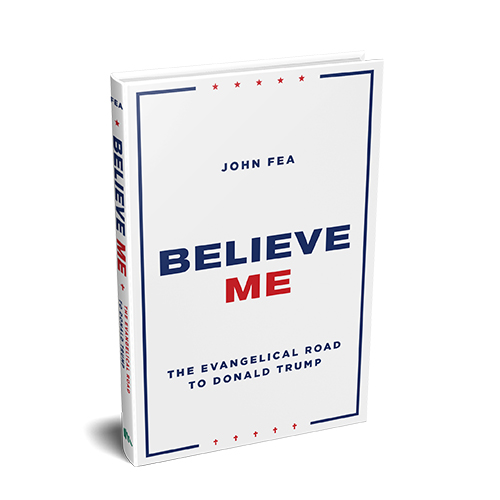 “Believe me” may be the most commonly used phrase in Donald Trump’s lexicon. Whether about building a wall or protecting a Christian heritage, the refrain has been constant.

And to the surprise of many, a good 80 percent of white evangelicals have believed Trump—at least enough to help propel him into the White House. Historian John Fea is not surprised, however—and in Believe Me he explains how we have arrived at this unprecedented moment in American politics.

An evangelical Christian himself, Fea argues that the embrace of Donald Trump is the logical outcome of a long-standing evangelical approach to public life defined by the politics of fear, the pursuit of worldly power, and a nostalgic longing for an American past.

As insightful as it is timely, Fea’s Believe Me challenges Christians and to replace fear with hope, the pursuit of power with humility, and nostalgia with history.

In 2011 Fea published Was America Founded as a Christian Nation? which won the Foreword Reviews/INDIEFAB Book of the Year in religion and was named as a finalist for the George Washington Book Prize; a revised edition was published in 2016. Fea received the New Jersey Academic Alliance Book of the Year award for his first book, The Way of Improvement Leads Home (2009), which was also named as an Honor Book by the New Jersey Council for the Humanities.

Working with fellow historians Jay Green and Eric Miller, Fea coedited Confessing History: Explorations in Christian Faith and the Historian’s Vocation (2010), named a finalist for the Lilly Fellows Program in Arts and Humanities Book Award. Fea’s other books include Why Study History? Reflecting on the Importance of the Past (2013) and The Bible Cause: A History of the American Bible Society (2016).

Dr. Fea is active on Twitter at @johnfea1 and blogs regularly at thewayofimprovement.com.

Born and raised in New Jersey, Fea now lives in central Pennsylvania with his family, including his wife and two daughter

“In Believe Me John Fea takes evangelicalism seriously, treating it with the honest respect it deserves. He also manages to help us understand American politics in a much clearer way. I highly recommend this book to all who remain confounded by the state of faith and politics today.”

Author of Reclaiming Hope: Lessons Learned in the Obama White House about the Future of Faith in America

“While the significant support for Donald Trump by white evangelicals has been the stuff of headlines, there has been little serious probing of the deeper factors at work. John Fea here gives us what we need, with his insightful tracing of the theological-spiritual road that has brought us to this point. A wise and important book!”

Author of Uncommon Decency: Christian Civility in an Uncivil World

“In the midst of this trying time, John gives us a road map to take the best parts of our religious beliefs and find a space for reconciliation, compassion, and kindness. Not just for others, but for ourselves. John’s bold, unwavering voice encourages us to find our common ground, and together to rise up against bigotry and hatred.”

“For those who think the embrace of Trump by the ‘court evangelicals’ might be an example of yielding to the political temptation that Jesus resisted (Matt. 4:8–10), this is the book to read. Noted evangelical historian John Fea provides a thoughtful and engaging account and critique of how this unlikely alliance came to be.”

Author of Religion and American Culture: A Brief History and Jonathan Edwards: A Life

“John Fea’s timely and sobering book shows convincingly how legitimate concerns from white evangelical Protestants about a rapidly secularizing American culture metastasized into a fear-driven brew of half-truths, fanciful nostalgia, misplaced Christian nationalism, ethical hypocrisy, and political naiveté—precisely, that is, the mix that led so many white evangelicals not only to cast their votes for Donald Trump but also to regard him as a literal godsend.”

Author of The Scandal of the Evangelical Mind

“Clear, concise, and convincing. . . . Fea uses his training as a historian to trace a chronology of the evangelical attraction to political power . . . and offers an alternative way (relying on hope and humility) for evangelical leaders to think about their relation to power.”

Paid Members of NYDLA: Email the receipt from your book purchase to JohnFea@NYDLA.org and we shall credit your NYDLA membership fee for one month (a $25 value). Fill out this form to purchase the book from Amazon.